I went to the con with married friends (that’s a perk of marriage) because my husbun had to work and my car is on sabbatical. Us wifeys got to talk Pokémon Go in the car, somewhat to the annoyance of Mr I Quit Playing. Little did anyone know that I was about to meet the Pretoria/Centurion Pokémon Go community … or that I knew most of them already. In the middle of ICON I left the con venue behind for the casino to hit pokéstops and raid. I won on the swings and on the roundabouts.

I haven’t been on many raids

I’m a casual Pokémon Go player. And I play for my health. Apparently I’m willing to go out in the cold to keep my daily bonuses, but walking for fresh air alone when it’s this cold, not so much. I’m only level 30. So I’ve raided with husband, and once in Japan because there were always enough people nearby to make it work. I hadn’t raided with friends before and lack raid legendaries.

We have every kind of gaming group in South Africa. The only trick is finding them. For Pokémon Go, just talk to the people wearing a Go Plus or those looking at their phones near a raid.

I didn’t know if we had community groups in Pretoria. Imagine my joy when I wambled up to the ICON tent pokéstop and found poképeople. I was told of the wonders of joining a group and searching for shinies. And standing the chance to win really awesome goodies at community days. And learning the true value of friendship: combat bonuses and cheap trades. Suddenly I knew the right people.

How my first raid with friends went down

At five minutes to the egg hatching, we met outside the events tent and made our way through the casino. We stood as the fearless Baxteen checked who we were expecting and that we all had each other’s friendship codes. In the middle of that the server crashed. It couldn’t handle all that random growing friendship.

We desperately refreshed. I restarted my app. And then the miracle: the server was back up and we still had 20 minutes before the Regice disappeared. More people from the con showed up, so more friendship codes were exchanged. And I finally got to my first legendary South African raid battle. We won, of course. 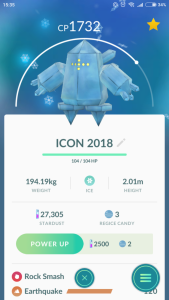 How did you discover your communities?