28 November  is a special day for me. Until last year, it was just my birthday. Today it’s my birthday and I’ve been engaged for a full year! If you’re just here for the organising tips, skip this post. It’s going to get soppy.

After our exams, Hardus and I headed off to to Mabalingwe Nature Reserve to rest up and bust the year-end blues. As it happens, we left on my birthday. This is important, because I was convinced nothing but my birthday could happen on my birthday. Which is why I was spectacularly unobservant (stupid) that day.

The progression is like a horror movie, but with a happy ending. Feel free to yell at the screen when you see me miss obvious clues. Yes, I’m also surprised at how gullible I can be.

The first bit of luck

I made plans to visit Arwen Garmentry and Corsetry’s Kist sale before leaving for Mabalingwe. For the uninitiated, this is when the talented Arwen Swan sells off old stock at amazing discounts. I went to see if anything would fit me and we got there just after the sale opened. I found a corset that fit like a glove. This, I thought, was one lucky birthday. That corset kept me from noticing Hardus and my friend’s devious plotting.

After the sale success, we headed out for noms. I remember the food was delicious. The only slightly odd thing was that Hardus was in a hurry. He wanted to be at Mabalingwe at two for checking in. I couldn’t understand the rush. After all, they let you book in till late. Silly Hardus, on the way there he didn’t even notice the car CD was looping.

When we got to our chalet, I found out we won a sunset game drive. I gushed to Hardus about how I’ve got the luck of the hobbits. (I’m a shorty.) He kept a straight face. We made it to reception just before the cut-off time. 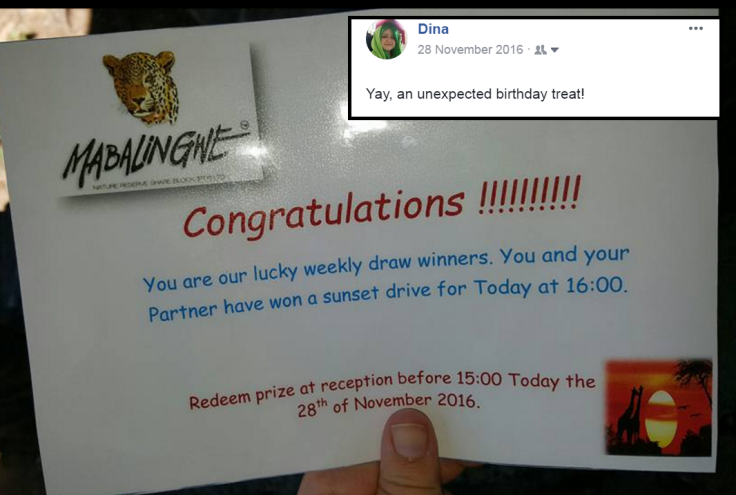 At reception I told the receptionist what a lucky day it was – how did they know it was my birthday? She told me they know all kinds of things at Mabalingwe.

The camera and the little purple flowers

I’m usually very camera happy. But for some reason, I decided to leave my phone behind and just experience the day. Hardus also left his phone at the chalet, but he did pack the camera.

I’m very happy he did, because I was  so surprised later the afternoon that I can’t remember what animals we saw. He took animal photos, but for some reason he also photographed me. All I remember now is seeing is little purple flowers with yellow hearts. 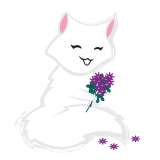 Anyway, after we drove around a bit the guide stopped and told us to go up the steps to a lookout point. I still suspected nothing.

I only found out afterwards, but the lookout point is called “Verlowingskoppie” (Afrikaans for engagement hill). As we walked up the path I noticed some little paper hearts and confetti. I jabbed Hardus in the ribs, “looks like someone got engaged here or something”. (There’s no hope for me.)

Once we get to the top there’s a romantic picnic set up. Flowers, champagne, pillows, the works. I circle round, not approaching the strange thing. (I might spend slightly too much time with my pet rabbits.) I look at the picnic … and look at the picnic … and ask Hardus if this was him (bad grammar and all). No, he said. I suggested walking down and asking the guide if it’s okay to tuck in. Hardus told me he’s thirsty and popped the bottle of champagne. He told me if it belonged to someone else, “it’s too late now”.

At this point I was suspicious, but I still thought it might just be a ridiculously romantic birthday treat. Nothing but my birthday can happen on my birthday, right? So to soothe the nerves I guzzled strawberries. I lent over Hardus, grabbed them, dunked them in the chocolate sauce and devoured them. I downed champagne.

My elegant display apparently set the mood. Hardus put his arm around me and asked:

“Can I keep you forever?” he asked and let go of me to get the camera bag.

I said nothing. At this point I finally suspected it’s a proposal. He pulled out a jewellery box and popped it open. I saw the ring. I reacted like a fucking lady.

Then the moment of truth, understanding and my crowning glory…

At this point Hardus was laughing merrily. Can you blame him? He laughed so much he didn’t realise that I accepted his proposal when I blurted out:

He thought it was just me self-correcting. Because who else could he possibly be proposing to?

After that, things blur. I say I admired the ring in the box for a while. Hardus says I looked at it as if it was a snake about to strike for about 15 minutes and kept gobbling strawberries. He says he would have been nervous, except that I’d told him about a month before that I’d accept if he proposed. He already had the ring then and thought I’d guessed the secret.

In the end he had to take the ring out of the box and and slide it on my finger. And I found the words to say “yes” like a normal person.

“Well, normal enough,” Hardus commented after I got him to read the story. I wanted to make sure I got it right, because it’s his story too.

“Do you still want to keep me forever?” he asked.

We’re sitting on my bed surrounded by tissues from my bout of sino-bronchitis.

“I freaking cooked for you last night. Even though I’m sick,” I wheeze. “And I’m not blushing, it’s fever.”

I think we’ll be just fine.

If you enjoyed this story, share it with your friends and tell me in the comments if you’d like more soppy  stories!